Fourteen school districts in northwest Lower Michigan are among 32 statewide that have extra funding this school year to purchase locally grown fruits, vegetables and dry beans. That’s thanks to a second year of the state’s 10 Cents a Meal for School Kids & Farms pilot grant program. Together the districts serve 22,567 students in our region.

That’s up from seven northwest Lower Michigan school districts that won grants last year. And, statewide, the total 32 grant-winning districts serve 95,000 students in three regions of the state, up from 16 districts in two regions in the first year.

Farms and local food distributors with fresh greens, storage crops like root vegetables and apples, and frozen products should still find a ready market with the grant-winning districts as long as supplies last.

Actually, it’s less than 10 cents, because the Michigan Department of Education, which administers the funds, wanted to give as many schools as possible at least some grant funding and added experience buying local. Nearly 80 districts — 28 from our region — applied for the funds, and there was only enough money to fully fund the top-scoring 19 districts statewide.

That popularity bodes well for continued support from the legislature to keep growing the program, as long as schools, parents, farms and other businesses say they want it.

Because of its popularity, the legislature this year expanded program funding from $250,000 to $375,000 and added the Washtenaw region in southeast Michigan to the counties in west and northwest Lower Michigan in which school districts were eligible to apply.

Do you have time to help 10 Cents schools with promotional activities like taking photos of kids eating the great food our farmers grow, or surveying them about their knowledge and preferences? If you’re a farmer, can you make a classroom visit? The legislature wants to see evidence that kids select, prefer, consume and know that they are eating Michigan-grown produce.

This story originally appeared as an agriculture forum in the Traverse City Record-Eagle on Dec. 9.

Diane Conners is senior policy specialist at Groundwork, which partnered with six area school districts and Traverse Bay Area Intermediate School District on a three-year, local 10 Cents initiative that inspired the state to adopt and expand the program. You can reach her at [email protected]. 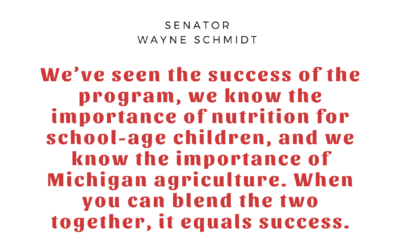