We are pleased to report that opposition organized by Groundwork and our partners has temporarily stalled Governor Snyder’s effort to fast-track a Mackinac Straits oil-tunnel deal with Canadian-owned Enbridge Energy. But the fight continues because Snyder’s allies in the Michigan Senate are scrambling to revive Senate Bill 1197, the legislation that is central to allowing the Enbridge deal to move ahead. Snyder and Enbridge feel their best chance of passing the bill is in lame-duck session, which expires at the end of December, so the intensity of the fight is sure to increase. Please continue your support! Details below. This past Tuesday, Groundwork led an impressive team of business and tribal leaders, as well as Mackinac Bridge supporters into nearly two dozen meetings with state legislators to present our opposition to SB 1197, the bill that would have the Mackinac Bridge Authority oversee and manage the Snyder-Enbridge oil tunnel. We shared deep and well-supported concerns about this dubious deal connecting Michigan’s iconic bridge with an oil pipeline tunnel.

It was less than three weeks ago that Groundwork pulled together a new Friends of Mackinac Bridge group for concerned citizens to engage in slowing down SB 1197. In that short time, nearly 700 people have joined the Friends of Mackinac Bridge group, which is led by former Mackinac Bridge Authority chairman Bill Gnodtke (appointed to the authority by Gov. Engler and served 22 years), and includes former bridge authority member and Grand Hotel owner Dan Musser, renowned Republican lobbyist Dennis Cawthorne, and Shepler’s Mackinac Island Ferry owner Chris Shepler. The Friends of Mackinac Bridge is coordinating with members of the Great Lakes Business Network, which now includes more than 100 business leaders who have expressed strong concerns, including Larry Bell, of Bell’s Brewery, Bob Sutherland, of Cherry Republic, and Patagonia.During the Lansing lobby day, several GLBN members spoke at a press conference about their concerns with SB 1197.

The efforts have paid off. While the original bill passed out of a Senate committee on a 3-2 vote Wednesday morning, the scheduled Senate floor vote on Thursday was postponed due to concerns raised by Groundwork and our partners. Now there are last-minute efforts to amend the bill, or potentially redraft it entirely, to get it passed during the lame-duck session.

Have you seen Friends of Mackinac Bridge?

The Friends of Mackinac Bridge formed in November 2018, in rapid response to the poorly conceived plan to have the Mackinac Bridge Authority oversee the Snyder-Enbridge oil tunnel in the Straits. As of December 2, the group already had 700 members and effectively deployed on a lobby day organized on November 27. See what they are about and please lend your voice and effort to this important group that has attracted people from across the political spectrum. 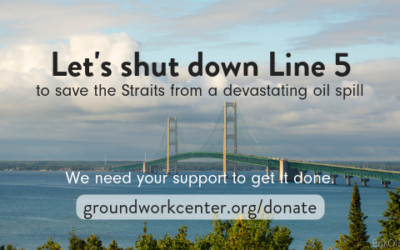