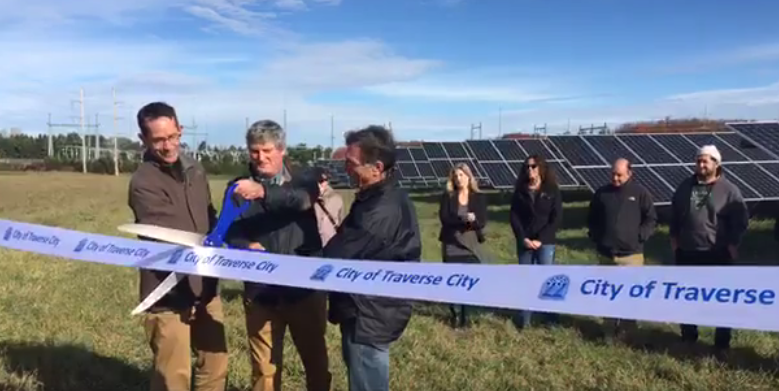 Traverse City took a leap toward its ambitious goal of powering 100 percent of city operations with clean energy with the opening of the M-72 Solar Project on Thursday, Oct. 26.

Click here to watch video of the ribbon cutting.

The Groundwork Center for Resilient Communities and the Michigan Environmental Council (MEC) attended the ribbon-cutting event to celebrate the milestone, and they praised Traverse City Light & Power and the City of Traverse City for working together to make this project a reality.

“This project is particularly special because of the process and collaboration that made it happen,” said Dan Worth, clean energy policy specialist at Groundwork. “You often hear about utilities, customers, cities, and advocates fighting over renewables — this is an example of how a community can work together to keep jobs and customer dollars local.”

“Climate change and the health impacts of pollution are urgent issues that require bold action, and cities like Traverse City are leading the way with ambitious clean energy goals,” said Kate Madigan, energy and climate specialist at MEC, and director of Michigan Climate Action Network. “It’s been less than a year since the City set its 100 percent clean energy goal, and this project shows that we are making real progress.”

Madigan added, “Thanks to the leadership of our city and utility, Traverse City is reducing our reliance on fossil fuels and reaping the benefits of local clean energy.”

The new solar array covers nearly four acres of land near Traverse City on M-72, the route most people take to get to the Leelanau Peninsula and Sleeping Bear Dunes. It is on the same site as a large wind turbine, which was the first utility grade wind turbine in Michigan. With the addition of this one-megawatt solar project, Traverse City now gets more than 21 percent of its electricity from clean energy sources.

In December 2016, the Traverse City Commission unanimously approved a resolution to power 100 percent of city operations with renewable energy by 2020, and to plan for the entire community to be carbon neutral by midcentury. More than 40 U.S. cities, including Grand Rapids and Northport, have set similar goals, and many other Michigan communities are now working toward similar goals. Both MEC and Groundwork have staff appointed to the Traverse City Green Team, which was created to implement the City’s clean energy goals.

Dan Worth is the Clean Energy Policy Specialist at the Groundwork Center for Resilient Communities. Reach him at [email protected]