Educate Your Candidates About 10 Cents a Meal Now!

Look up and email your district candidates here.

Right now, every seat for the Michigan House of Representatives is up for election, and that is very important for the future of a critical state program that helps schools purchase Michigan-grown fruits and vegetables for school meals, called 10 Cents a Meal for Michigan’s Kids & Farms.

We have made it really easy for you to educate candidates in your district about the program with a simple-to-send email here. If you can take a minute to do this, it will make a major difference because 10 Cents a Meal is easily missed, even by incumbent legislators who may be candidates. After all, the program is a single line item in a huge School Aid Budget.

Yet, legislators and would-be legislators always are pleased to learn about 10 Cents a Meal, no matter what side of the aisle they are on. Just take a look at this example, which happened to me this week.

OMG I Love This!

A Republican candidate emailed the following to me after I reached out through her website to ask what email we should provide for constituents in her district to contact her on issues important to them. I also provided her with a link that told her more about 10 Cents a Meal.

“OMG I LLLLLLLOOOOOOOVVVVVEEEEEEEEEE this!” she wrote. “And you can quote me! Wonderful stuff! … Very excited to learn more! I am a huge proponent of healthy eating and teaching kids what that means early on. I am so happy to see your efforts and I am very supportive!” In a separate email she said: “Especially in these times, locally sourced food is very important.”

Both Republicans and Democrats

And last year in March we saw just as powerful a response from an incumbent Democratic legislator when he learned about the program from a delegation of 20 dietitians from the Michigan Academy of Nutrition and Dietetics. They were in Lansing for a legislative day to share information about topics important to them, including 10 Cents a Meal. One legislator invited them into his office after they spotted him in the lobby of the House office building.

That legislator was the now late-Rep. Isaac Robinson, a Democrat, who was legendary as a passionate champion for his district and issues he thought would benefit them. Rep. Robinson popped out his cell phone while the dietitians were still in his office and texted the superintendents of Detroit Public Schools Community District and Hamtramck Public Schools. Were they interested in this program, he asked?

Fast forward and my inbox showed a flurry of 17 emails from Rep. Robinson spanning March 23–May 10 of last year to Winona Bynum (one of the dietitians who spoke with him in Lansing), school officials, and other southeast Michigan advocates. I was on the email string because I work with Winona in her role as executive director of the Detroit Food Policy Council on the 10 Cents a Meal initiative.

“We still have a chance to try to expand it in the House budget,” he said in one email. “Let’s push forward. I would like a letter from your organization and as many other organizations as possible that I can staple and share with my colleagues on the House floor explaining the benefit.”

In another, he said: “It might be good for us to do a press event to raise the level of support for this program. If we do it, I would like to do it in my House district, possibly at a school or other location related to nutrition. Who would be in for a little rally and presentation about this program?”

And here is the rally that resulted.

There are 14 candidates now running for Rep. Robinson’s District 4 seat, all but one of them Democrats.

They are among 418 individuals running for a total of 110 seats. And depending upon where they are running in the state, some of the elections will effectively be decided in the August 4 primary that’s coming up in just a couple of weeks, because they are largely Democratic regions or Republican regions.

You never know the difference you might make by contacting those who want to represent you.

Here’s where you can find more information, and an email that you can send to your candidates. Do it now. The August 4 primary is less than two weeks away. And let us know what you hear!

Sen. Schmidt Making Us a Priority

10 Cents a Meal for Michigan’s Kids & Farms has gone without funding for a full school year, first because the program got caught up in disagreements between the governor and the legislature over roads, and again when a school aid supplemental budget that included 10 Cents expansion was pulled back at the last minute because of COVID and school closures.

That funding failure was heartbreaking, because the program was about to be expanded to $2 million and be available statewide after being a pilot program in only about half of the state.

Now, the state is facing a budget crisis due to COVID. It has devastated the economy, and sharply reduced expected tax revenues.

Sen. Wayne Schmidt, R-Traverse City, who chairs the key appropriations subcommittee that drafts the School Aid Budget, said he still will make 10 Cents a Meal one of his top priorities for funding in addition to the absolute top budget appropriation for schools, called per pupil funding.

“My goal is to keep it in,” he said of 10 Cents a Meal. “Sadly, it won’t be as much, but we just flat out don’t have the revenues. But we want to maintain the infrastructure for it so we can quickly ramp it back up—whether it’s through the economy getting better or with federal aid, or any combination.”

The COVID crisis has shown how important 10 Cents a Meal is now more than ever. It supports nutritious school food for children, and COVID has shown how essential school food is for them even when school buildings are closed and kids are on summer vacation. The program also provides markets for farms facing economic crisis. And, as national supply chains have faltered due to COVID, 10 Cents a Meal also strengthens our local food supply chains.

How many of Sen. Schmidt’s new House counterparts, who will be elected this year, know about 10 Cents a Meal? Talking with candidates now could make all the difference for having even more champions in the legislature by his side. Find a way to educate them about 10 Cents a Meal here.

State Funds for Healthy, Locally Grown Food in Your Child’s School (apply by 8/23!)

The passion is breathtaking. Hundreds of schools, early childhood education centers, after school programs, and others have hit “submit” or “save” on applications to the Michigan Department of Education (MDE) for the 10 Cents a Meal for Michigan’s Kids &... 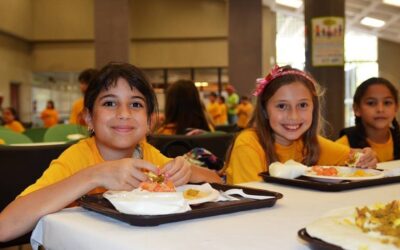 Governor Gretchen Whitmer signed HB 4411, the $17.1 billion K-12 budget, into law yesterday afternoon, surrounded by students and faculty at East Kentwood High School. The bill accounts for the largest single-year School Aid Fund budget ever passed by the state, and...

It wasn’t always a pretty process, but the legislature managed to uphold its self-imposed July 1st deadline for at least one of its statutory budgets by passing a budget for K-12 schools. Included in the largest single-year School Aid Fund budget ever passed in...