In upstate New York, the college town of Ithaca, New York, is growing like crazy. Each year, more and more residents are flocking to the city’s downtown and surrounding neighborhoods. Within the past 15 years, the square footage of Ithaca’s downtown buildings has more than doubled, according to planners.

Yet, more people walk to work in Ithaca than anywhere else in the country. Due to the city’s compactness and density, nearly one of six Ithacans walk to work, and only two-thirds choose to drive a private vehicle—the second fewest of all US metros.

Ithaca’s unique commuter culture was a strength city leaders sought to tap as they searched for innovative transportation solutions to reduce traffic pressure in the growing city that is the hub of Tompkins County.

The answer came in the form of community bike-share, devised as a public-private partnership between local government and micro-mobility company Lime. Bike Walk Tompkins received grants to study different bike-share systems and eventually helped negotiate an agreement between the city and Lime. The bike-share launched in spring 2018.

Already, the bike-share seems to have taken off. In the system’s first three months, more than 4,000 residents rode Lime bikes throughout Ithaca, and they logged nearly 80,000 trips in the first year. A closer look at the data reveals an even more promising story.

The highest volume of rides in Ithaca occurs between single-family neighborhoods and commercial districts. This is good news for advocates who say that new micro-mobility options are sustainable transportation tools, and more than just playthings for big-city dwellers or college students (Ithaca has nearly 30,000 college students during the academic year).

T.C. Mobility Lab wanted to learn more about Ithaca’s successful partnership with Lime, so we reached out to Tom Knipe, Deputy Director of Economic Development for the City of Ithaca and a member of the Bike Walk Tompkins Steering Committee.

What sort of bike-share system does Ithaca have?
Our system is based on Lime’s bike-share, which is a dockless system with a couple different types of bikes. There’s the traditional pedal bikes, but Lime has been introducing more e-bikes into the fleet. These cost more to rent, but people prefer them because our town has a lot of hills. They’re also a bunch of fun to ride, too.

Why did you partner with Lime over other micro-mobility companies?
We chose Lime after holding an RFP. In comparison to the other companies, they really stood out to us. Their bikes are solid and reliable, their app is user-friendly, and importantly, the users like it. We were surprised by how much we liked their dockless bike system. Originally, we’d planned on a dock-based system, but we realized that dockless bikes were a better fit for our community.

What are the advantages of a dockless bike system?
Docking stations are expensive and restrictive. But with dockless, you can check out a bike anywhere, and ride it wherever you want to go, without worrying about finding a docking station at the end of your trip.

Speaking of costs, how affordable is Lime for the riders?
Not very expensive at all. Pedal bikes cost $1 every 30 minutes, and e-bikes cost $1 plus fifteen cents per minute. But we also tried to increase accessibility with a program called Lime Access, which offers free or low cost rides to students and lower-income residents.

How does Lime Access work?
Essentially, your rides on Lime will become free or heavily discounted. Our current rates are 50% off all e-bikes, and 95% off the standard bikes. You’re also able to rent the bikes, even if you don’t have a smartphone, with an easy text-to-unlock feature.

Ithaca has Lime bikes but not Lime e-scooters, why is that?
Unfortunately at the state level, e-scooters are illegal in New York. However, it seems likely that will eventually change, and when that happens we’d like Ithaca to be one of the first cities in New York to have e-scooters. Already, our city commissioners have drafted some policy recommendations.

On the topic of policy, how did Ithaca regulate bike-share?
The main issues for us to solve were clutter and parking. We found that a useful tool was regulating which parts of the sidewalk the bike can park on. Our ordinance states that you can park the bikes in the space between the street trees, or next to a bike rack—but not in the bike rack! If you allow riders to park Lime bikes in the bike racks, it takes away parking from regular bikes. To help us enforce our rules, Lime makes riders agree to the rules in the app. Through their app, Lime can geo-track and penalize users if they park incorrectly. Another rule was determining to cap the amount of bikes between 200 and 300. However, we think that we might need to increase that number, and we’re currently concerned Lime might want to decrease that amount if e-scooters become legal in New York.

Why are you concerned?
We’ve noticed Lime has helped with the first-mile/last-mile connection. We’re a small community, but we’re seeing lots of growth. We need new ways for people to live in town with access to transportation. I think bike-share will have to play a part in our economic and downtown growth, so we don’t want to see them leave. Even in a small town, micro-mobility can have an impact on how people move.

For more information about Bike Walk Tompkins and their partnership with Lime, visit their website.

Bike Walk Tompkins and the City of Ithaca produced a detailed analysis of ridership data from 2018. Download the report here.

No Matter How You Vote on the GT Road Commission Millage, Speak out Against the Hartman-Hammond Bridge

The Grand Traverse County Road Commission wants to spend $1.2 million in public money to study a new bridge over the Boardman River. It’s time for the Road Commission to move past the bridge and focus on real solutions.

Milestones: Kelly Thayer Shares Memories and Takeaways From Bridge and Bypass Battles in TC and Petoskey!

In our 25th year, we’re celebrating milestone achievements from our legacy. Kelly Thayer talks about our earlier opposition campaigns to protect the rural character of our landscape. 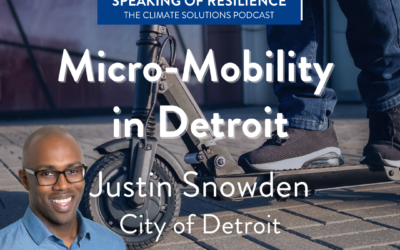 Detroit got us off the sidewalks and into our cars. Now urban planners see the need to reverse that scenario: get people on bikes, e-scooters and on their feet, for the health of our people and our community cohesion. Justin Snowden, chief of Mobility Strategy, City of Detroit shares insight.