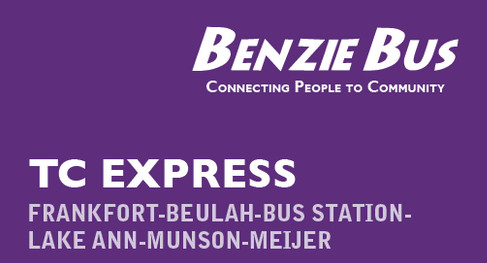 Earlier this month, I set out on a mission to ride the bus from Traverse City to Frankfort. The nearly 80 mile round-trip task seemed daunting at first, as I imagined spending the better half of my day commuting back and forth. I was pleasantly surprised to discover the TC Express, a Benzie Bus route that takes an average of one hour to get from city to city. While this option is much better than the two-hour BATA/Benzie connection through Interlochen, there is still room for improvement. To boost ridership among everyday workers, Benzie Bus should ensure schedules are up-to-date, promote the service to potential riders, and eliminate the call-in-advance reservation system for this route.

I began my journey at the BATA Hall Street transfer station, where info about traveling to Benzie was hard to come by. The BATA attendant told me that to get to Frankfort, I should catch the Benzie Bus TC Express. I asked her if she had a printed schedule available since I wasn’t able to locate one among the BATA schedules on display. She informed me that Benzie Bus no longer supplied them with schedules as their routes tended to change frequently, but that she may have a few stashed behind the desk. She immediately found one, handed it over, and wished me luck on my journey.

I began to study the schedule and noticed that 24-hour pre-booking is encouraged. I called the number listed for Benzie Bus on the schedule fearing that I wouldn’t be catching a ride to Frankfort that day. I explained to the Benzie Bus employee that I needed to get from Traverse City to Frankfort that afternoon and was hoping to catch the 3:30 departure from Meijer (one of four available on weekdays). I was still able to book a ride with just a few hours’ notice, however it’s much more convenient to just show up at a bus stop at the scheduled time and know that a bus will be there. Calling ahead is one barrier for most everyday riders.

I was glad I called. The actual departure times were different than what was listed on the schedule. The time discrepancy did not affect my plans as I would still be able to accomplish my mission, but it may have been quite an inconvenience with a stricter agenda that day.

Continuing my journey, I was able to catch the route #4 BATA Bus to Meijer/Olesons West that departs the Hall Street station every half hour. From there I was able to make the transfer from BATA to Benzie Bus. The driver was attentive and courteous as he welcomed me, asking my name to ensure he picked up a scheduled rider. We continued on to Munson Hospital where we picked up a few more folks. It became clear to me that my fellow riders were regular commuters on this route as everyone was on a first name basis. The trip to Frankfort took just over one hour, stopping only to drop commuters off at their parked cars along the way. The return trip, leaving from Glens Market in Frankfort, took less than an hour. I was the only rider and there were no stops before returning to Meijer.

I recommend this option to Benzie-to-Traverse City commuters in the region. Overall I had a very positive experience on the TC Express. It was a fast and direct route. The $8 round-trip ticket price is very reasonable, and it saved me gas money and wear on my vehicle.

When MLUI surveyed more than 1,500 local employees last year, they found that many employees wanted to use the bus for their commute, but information about the bus was unavailable to them. Ridership would increase if schedules are printed correctly, and workers know the service is there.

Long-planned Civic Square for Traverse City Could Be Reality Thanks to Rotary.

A $1 million grant from Traverse City’s Rotary Charities may make a long-envisioned civic square a reality for this beautiful bay-side town.