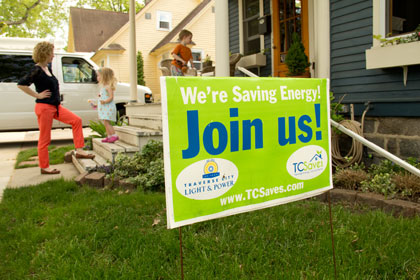 The community-wide effort, dormant since last spring, has a new goal, a new partner, and special borrowing options.

In its first three phases, spread across 18 months, TCSaves’ one-stop service helped 550 homes–20 percent of the city’s homeowners—become more comfortable and cheaper to operate. The new phase aims to reach an additional 150 residences.

TCSaves debuted in October 2011, triggered by a U. S. Department of Energy grant, and aided by customer incentives the local power company offered for its state-mandated “energy optimization” program. It brought together the City; local nonprofits SEEDS and the Michigan Land Use Institute; three local home-improvement contractors; and the statewide energy efficiency nonprofit, Michigan Saves.

Each homeowner paid $100 for a basic package. Strong word of mouth accelerated the program’s initial success, which led to several funding renewals.

“They have done incredibly well,” Mary Templeton, who directs Michigan Saves, said of the Traverse City project. Michigan Saves managed the $30 million, federally funded BetterBuildings for Michigan (BBFM) program that, via the Michigan Energy Office, funded TCSaves and 57 similar programs around the state. Her nonprofit collaborated with many stakeholders to develop, guide, fund, and arrange loans for participating homeowners.

“TCSaves was the first program we awarded more grant money to when their original funding ran out,” she added.

The grant closed as planned in early 2013, and the funding for marketing, management, and interest rate buy-downs closed, too, so TCSaves paused last spring.

SEEDS and MLUI searched for a way to revive it and, in October, Traverse City Light & Power, the city’s publicly owned utility, awarded them $60,000 to renew, market, and administer the project.

“The way they presented the proposal and the way it would incorporate into what we are already doing with [state-mandated] energy optimization made it a very easy decision for the board,” said TCL&P Executive Director Tim Arends.

The contractors, pleased with the business and good will TCSaves generated, agreed to keep home analyses fees at $100—a third of the going rate—without the grant funding that once covered the difference for them.

Arends, TCL&P’s chief financial officer when TCSaves began, said he supported the program even as the utility viewed it from the sidelines. He thinks his utility’s funding of the program to revive it makes sense.

“It goes so well with our business model, especially with the state requiring ‘energy optimization’ programs to achieve 1-percent savings in kilowatt-hours every year,” he said.

That model is working. TCL&P accomplished 162 percent of its 2012 optimization goal, making it the second-most successful optimizer in Michigan. The muni concentrated on its commercial customers—who account for 80 percent of TCL&P’s sales—but savings produced by TCSaves helped out.

“I think it was very well described and advertised by SEEDS and MLUI,” he said, adding that targeting specific neighborhoods in the first campaigns—a key BetterBuildings strategy—worked.

“They created a bit of envy in certain neighborhoods that were not first included,” he recalled. “Then, you add in all those yard signs, and the commitment of the people behind it, who really wanted it to be a success.”

Arends also believes that TCSaves worked because, “the relationship between government and private organizations is very strong here. The L&P board, the city commissioners—they are very engaged in the environment and efficiency.”

Templeton said teamwork was the key.

“Collaboration made it incredibly powerful,” she said. “We’ve learned that you need that trusted, credible messenger to get the word out effectively. MLUI, SEEDS, the city, and the muni are very credible, so residents knew they could trust the program.”

“Traverse City definitely stood out,” she added, “and I smile when I think about it. The weather up there just didn’t matter; they were out there knocking on people’s doors, and the neighbors were so receptive. That’s very unusual. It’s a very different vibe; people knew they were coming, saw the signs, got the letters from the city, and people opened up their doors.”

Even though the many door-to-door campaigns around the state have wrappted up, Michigan Saves remains busy. For homeowners, the nonprofit facilitates unsecured, 7-percent, 10-year loans backed by a sizeable loan loss reserve and buttressed by a remarkable, less-than-1-percent loan failure rate on its more than 3,000 residential loans totaling $25 million.

“When people finance instead of paying cash, they invest about twice as much in efficiency because they can spread out the repayments” Templeton said. That way, she explained, when monthly energy savings are subtracted from monthly loan payments, many homeowners see only a small bump in overall budgets.

“You can afford to pay, for example 10 or 20 dollars a month more to be more comfortable in your home,” she said.

The approach is working well, she said, even in communities without dedicated, local efficiency programs.

“We are seeing strong interest, especially with winter coming on,” she observed. “With the utilities starting to roll out their 2014 rebate programs [most have spent their 2013 optimization funds], interest is increasing again.

“Our loan volume has been consistent, even without assistance from BetterBuildings,” she added. “We’re seeing about 80 to 85 loans per month, almost the same as when all the neighborhood sweeps were going on.”

Several years before the program launched, Members teamed up with Michigan Saves and Cherryland Electric Cooperative, which serves the area surrounding Traverse City, on a residential efficiency program. But the program found relatively few takers, and so the credit union declined TCSaves’ initial invitation to the project.

But TCSaves’ subsequent success and a new Members CEO changed the conversation. It now offers several loan options that, along with Michigan Saves’ list of approved lenders, provide a spectrum of secured and unsecured loans with varying terms and rates.

“They only worked on so many blocks at first, and then opened it up,” he said. “It wasn’t a shotgun approach, it was more like a rifle.

“They had somebody to hold their hand all the way through—local groups everyone trusted,” he added. “Then the people who first used it [and liked it] kept repeating the message until others got it.”

McKellar said Members requires a home energy analysis before offering unsecured loans between 5 and 7 percent, with terms up to six years, or home equity loans of up to 10 years. He said Members can do that because its pioneering Michigan Saves loans for the Cherryland program were successful.

“We have not had any delinquencies that I’m aware of in seven years,” he said.

Success, by the Numbers

As TCSaves and its sister programs around the state wound down last year, BetterBuildings staff tabulated numbers for the DOE—which wants to determine best approaches to building communitywide efficiency programs.

The final, Sept. 30 report showed that the 58 sweeps met or surpassed all of BBFM’s goals. The residential program aimed to reach 9,180 homes, but served 11,571, beating its goal by 26 percent.

There was also a program for commercial buildings in Detroit; together, the two programs hoped to create 2,063 jobs, and actually produced 3,214—155 percent of its goal. Most were in design, creation, management, administration, and quality control—basic to new, ground-up projects. It also provided 982 full-time contractor jobs.

BBFM hasn’t yet received utility confirmations of per-household savings, but conservative estimates show the average participant saw a 14-percent fall in home energy use. It is estimated that participants save $2.342 million in energy costs annually.

A follow-up survey by Michigan State University found that 86 percent of respondents were satisfied with their initial home analysis and the efficiency measures that were provided. Ninety-two percent of those who had additional work done were satisfied; 92 percent would recommend their certified contractor. Overall, 94 percent said BBFM was a good investment of their money.

Templeton expects the good news to continue in 2014.

“There’s a statewide public service campaign coming out in 2014 with DTE Energy, Consumers Energy, Dow, and Michigan Saves to alert homeowners to their home’s energy efficiency potential,” she said. “It is creative and unique.”

And, she adds, there’s still plenty to do.

“If we really want to make a difference in our energy consumption, we need to get deep into each home’s unique needs, and really understand them,” Templeton said.  “We need to see more utility rebate funding to reward people who make big improvements. Cash rebates, buying down interest rates, offering aggressive loans—those are really powerful. They drive the market.”