The T.C. Mobility Lab remains committed to helping the Traverse City community understand how new mobility tools could help people get around while reducing car traffic. We will be writing, sharing stories and are planning a virtual event that will focus on how other communities are adapting their transportation efforts in the new era of COVID-19.

As the city of Traverse City develops its approach to shared bikes and e-scooters, we’re digging deeper into the guidelines other towns have developed to make sure new mobility tools advance local goals. Here we check in with West Lafayette, Indiana. Next up is Ithaca, New York.

When in the fall of 2018, Bird dropped nearly 2,000 e-scooters overnight on the sidewalks of West Lafayette, Indiana, city leaders had a tough decision to make: how do we get these “birds” to fly away?

City officials knew that e-scooters could be a valuable asset for their community. However, the unannounced and unregulated deployment of e-scooters was a liability—clogging walkways, blocking paths, and littering public places.

The city moved quickly in response. By early 2019, new e-scooter ordinances were on the books, the Bird scooters were gone, and a new company, Spin, was contracted—albeit for only 300 scooters.

So, after city officials felt like they had been “given the bird” by the e-scooter industry, why were they so keen to bring scooters back so quickly?

The answer lies in the city’s geography and demographics. Although home to less than 30,000 full-time residents, West Lafayette is the most densely populated city in Indiana, and during the school year recieves an influx of some 40,000 students to Purdue University. These are ideal conditions for the growing micromobility industry, which is generating interest among both city planners and residents who’d like to reduce car traffic on city streets.

Data collected during Spin’s initial season seems promising in that regard. From June 23 to October 5, 2019, nearly 70,000 rides were documented. The average scooter made eight trips throughout the day, primarily for short distances—under two miles. Assuming that each scooter trip would’ve been made by car, e-scooters reduced daily car trips by 2,400 in West Lafayette.

T.C. Mobility Lab has been taking a critical look at the approaches other communities are pursuing to solve traffic problems, particularly those communities innovating with new transportation services like bikeshare and e-scooters.

West Lafayette seems to be putting the right policies in place. After a rocky introduction to micromobility, town leaders designed an ordinance that allows e-scooters to reduce traffic pressures, while putting in place regulatory measures to ensure smart and safe operation.

Groundwork wanted to learn more, so we reached out to Julia Zuchkov, administrative aide with the City of West Lafayette’s Department of Development.

There have been a lot of articles coming out of West Lafayette regarding bikeshare and e-scooters. Can you tell us what’s going on?
Well, in 2018, Bird scooter suddenly appeared before we had any rules in place to regulate them. There was a lot of discussion about how best to do that, and we eventually adopted an ordinance last year which dictated how scooters and bikeshare have to operate within the city.

Why was the new ordinance important?
West Lafayette desperately needed this ordinance! When Bird came, it was overwhelming. They dropped a couple thousand scooters.

A couple thousand?!
(Laughs) We still never got a clear number of exactly how many were in the city. They were all over the place—piling up on street corners, and blocking sidewalks. It was really bad! Even worse, Bird wasn’t particularly helpful or willing to work with us. So that’s when we hit the ground running to finish an ordinance that had been in the works. Bird eventually left just before the ordinance went into effect because winter had just started. So in a way they just … flew away!

After the challenges that Bird presented, what ended up being included in the ordinance?
We wanted scooters, so the ordinance allows for them, but regulates how they operate in the city, and how many they can have at a time. We contracted with a different operator, Spin, last year, and they’ve been great to work with. They’ve been very communicative and receptive to our ordinance, even the scooter cap.

What is the scooter cap?
Our ordinance limits them to 300 scooters, a lot less than the couple thousand that Bird brought!

Are there any regulations about where e-scooters can be located?
While there’s no regulations about what part of the city people can ride them in, we do have what we call “deployment zones.” Think of them as scooter parking spaces throughout the city, with the idea being that they can only be parked in those spaces.

Did those deployment zones cost the city much to create?
All of those costs were covered by the permit fee Spin pays to operate here. But the costs to create the deployment zones weren’t very much to begin with. The street department created the zones by laying down a special asphalt tape to designate the zone. It was very simple, easy, and cheap. We’ve thought about putting in permanent infrastructure, but haven’t yet simply because we’re not sure how long they’re going to be around.

What about rules that regulate where people can ride?
We thought of that too. Through the app, the scooter user must agree to certain conditions before they can begin the ride. There’s also a sticker printed on the scooter itself as a reminder. These rules are things like not riding on the sidewalks, and yielding to pedestrians.

How would you say the ordinance has been working?
This first year has been going really great. We didn’t see or hear of any problems, and the company respected our rules and deployed only in those areas. The riders followed the rules too and parked the scooters right back into those places. We were very surprised by how few complaints we had, especially considering how poorly scooters started off here with Bird. While we’re still testing the waters, we will continue to watch how scooters affect our city.

Columbus, Ohio, received $50 million in grants to put new mobility tech and strategies on the street. Groundwork’s Jim Bruckbauer visited and shares impressions. GIVE A READ

No Matter How You Vote on the GT Road Commission Millage, Speak out Against the Hartman-Hammond Bridge

The Grand Traverse County Road Commission wants to spend $1.2 million in public money to study a new bridge over the Boardman River. It’s time for the Road Commission to move past the bridge and focus on real solutions. 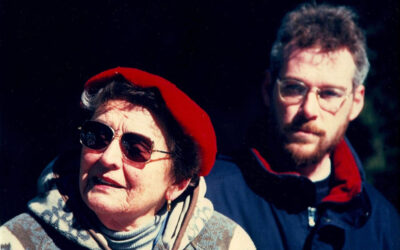 Milestones: Kelly Thayer Shares Memories and Takeaways From Bridge and Bypass Battles in TC and Petoskey!

In our 25th year, we’re celebrating milestone achievements from our legacy. Kelly Thayer talks about our earlier opposition campaigns to protect the rural character of our landscape.

Detroit got us off the sidewalks and into our cars. Now urban planners see the need to reverse that scenario: get people on bikes, e-scooters and on their feet, for the health of our people and our community cohesion. Justin Snowden, chief of Mobility Strategy, City of Detroit shares insight.